The Chinese have a famous curse, “May you live in interesting times!”, or in other words, may you live in an era of social turmoil. No one who has experienced the last few years in the United States could deny that we are going through a major political, social, and economic upheaval.

Many are quick to attribute this to politicians, pandemics or social movements- they look for the easy explanation or the obvious culprit.  There are others, though, who understand that societies have cycles, and they’re influenced by the stars and the planets. Just as when the days grow shorter and the leaves begin to turn color, we know winter is upon us, so too are there cosmic signals that let us know when countries and cultures are entering difficult times.  Those signals are flashing red and have been on high alert since 2018.

Those who are awakened to the signals of the cosmos know that now is the time to protect their families and loved ones and prepare themselves to survive the winter and prosper and manifest the joyful abundance that will come when spring arrives. 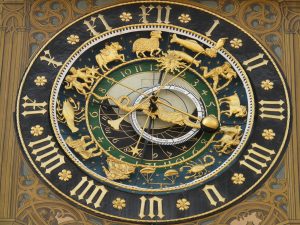 Since the beginning of known history, eclipses have been an ominous sign.  When the Sun or Moon disappears, even momentarily, it creates a sense of foreboding.  The North Node in astrology marks the place in the zodiac where eclipses occur.  In January of 2022 the North Node moved into the sign of Taurus, a sign that represents wealth and stability and one, as we will see, that is very sensitive to the stability of the United States. Not only will  there be two eclipses in the sign of Taurus in 2022, but Uranus, the planet of revolution, is now there as well.

Uranus takes 84 years to travel through the twelve signs of the zodiac.  This is one of the most important planetary cycles as the 84 years represents four generations or four seasons.  Uranus is the planet of upheavals and change, often considered the higher vibration of Mercury- a turbocharged Mercury if you like.  We all know the way a Mercury retrograde can disrupt our lives by wreaking havoc on travel plans and causing chaos with payments and electronic devices. Mercury is a personal planet, but Uranus is a transpersonal planet related to revolutions and democracy which affects society as a whole.  In a sense, our entire civilization is going to have a massive “Mercury retrograde”. Uranus moved into the fixed sign of Taurus in May of 2019, always an ominous sign for the United States.

Taurus is a femine earth sign ruled by Venus.  It represents the material and monetary expression of Venus-  the riches and treasures of the earth. In Taurus we see in a physical form the wealth and abundance of Venus. Uranus entering Taurus has always been the precursor of the great upheavals in American history, both financially and politically.  Let’s take a look at the last three times it has been in the sign of Taurus:

Uranus moving into Taurus marks the pivotal moments in American history, and from what we have seen in the last few years, we are clearly in the Fourth Turning, the term created by William Strauss and Neil Howe in their well known book by the same name.  The Fourth Turning describes periods when there is a complete paradigm shift from which a whole new society emerges.  These changes are so profound they are difficult to even imagine, but the  signs of change are evident as we reach the end of one cycle and begin a new one.

Uranus is a lighting rod for change and disruption, and when it enters the sign of Taurus, the United States has been forced to deal with it’s demons: sometimes foreign threats as in WWII or the Revolutionary War, or its own inner demons as in the Civil War.  The news is full of the signs: the pandemic, civil unrest and the breakdown of the rule of law.  There is no doubt that we are once again facing a pivotal moment in our history.

Unfortunately, inflation is also in the news.  Prices are skyrocketing, gas prices are at all time highs, home prices are soaring, and the stock market is at record levels while the world economy is in shambles, small businesses are shuttering and there are massive disruptions in the workforce.

What the heck is going on?  Why are prices rising if many people are still not back to work and small businesses are closing?  This is simply inflation;  the government has printed 13 trillion dollars in the past 18 months, and as a consequence, paychecks are worth less as assets (like houses and stocks) and consumer goods (like groceries and gas) are more expensive.

How can you protect yourself and your family from the things governments, bankers, and big corporations are doing that you have no influence over?

Embrace the astrological tides and don’t fight the energy of the Cosmos.  We’re in the middle of a Uranus in Taurus Mercury-Retrograde-style dust-up in the financial and political structures we live under.  As we know from our regular experience with Mercury Retrograde, if we know not to fight it, and we EMBRACE it, we usually come out the other side better for it.  That doesn’t make it an easy or fun process though. So how do we tackle this problem?

For many, the answer is cryptocurrencies like Bitcoin and Ethereum because these currencies can’t be manipulated.

Now is the time to learn about cryptocurrencies…..

It’s clear from our recent history that the fabric of our society is ripping apart.  People are losing faith in government, media, and academia while our politics have become incredibly polarized.  It seems almost impossible to find a good way out, which is a clear sign that we are entering the darkest period of the Uranus cycle (the Fourth Turning).  But there is a path to heal and re-imagine our institutions, and this will happen on the very same technology that powers cryptocurrencies- blockchains.  What blockchains do is decentralize power, they take it out of the hands of the 1% and put it into the hands of the rest of us.  No longer can the few dictate to the many, and not only with money, but with any kind of organization.  Blockchain technology will revolutionize how we interact on social media, how we purchase products and even how we govern ourselves.

This new world which we are being thrust into is filled with some complex terminology-  blockchains, the metaverse, NFT’s, crypto wallets, DAO’s etc… They can be somewhat intimidating at first, much like the terminology of astrology, but with good instructors and an open mind, they can be understood and incorporated into our lives.

The world that is emerging is often referred to as the Metaverse. You may have seen recently that Facebook changed its name to Meta, that the price of Bitcoin is skyrocketing or that someone bought a piece of “digital land” in a virtual world for $450,000 just to be the neighbor of Snoop Dogg!  Mark Zuckerberg sees this clearly, and that’s why he has tried to quickly shift the focus of Facebook to this new, blockchain world.

You may have heard of NFT’s (Non Fungible Tokens), like this famous sale of a digital work of art that sold for 70 million dollars!  But it’s not just art, 27 billion dollars of NFT’s were sold in 2021.  NFTs are a new way to own assets that are stored on blockchains.  They can be crazy meme art, represent ownership of a piece of a famous Renoir painting, or even be used to buy a real world apartment.  They can represent anything that is unique and valuable that a person might want to prove they own.

And it’s not just money and art, new organizations are appearing, DAO’s (Decentralized Autonomous Organizations)  also use blockchain technology.  These new types of organizations will revolutionize the relationship between artists and fans, social media sites and their users, businesses and customers, and even governments and citizens.

Just like computers (which were invented at the end of the last Uranus in Taurus cycle) changed just about every aspect of our lives to where a person living pre-1940s wouldn’t recognize the world we live in today; the blockchains and the crypto currencies, assets, and organizations that are built on them, will transform our future in ways we can’t even begin to imagine.

The world is clearly transforming itself in a dramatic way and in order to safeguard our loved ones and manifest a new, peaceful and abundant world, it’s crucial to become informed.  Now, more than ever in our lifetimes, we must make the effort. It may seem intimidating at first, but these terms can be mastered with just a minimum of time and effort.

Understanding what blockchain technology is will reveal to us how it is transforming our culture, politics and economics.  Those of us who understand that these changes are part of a grand cosmic cycle know that this isn’t just some new technology, this is a revolution; a profound paradigm shift, that if understood and used wisely can bring us the abundance and harmony that we and our loved ones deserve.

One in six Americans is already invested in crypto assets, be it cryptocurrencies or NFTs.  Once we hit the tipping point, there will be a stampede into these products as the old regime collapses and the new world emerges from the rubble.  There is no time to wait.  Becoming informed now is the only way to ensure that we will be able to manifest the prosperity and abundance that is our birthright.

21 Secrets of the SAGITTARIUS Personality

Sun Mercury conjunction in the 12th house of Astrology